Ski Touring in the Lake District 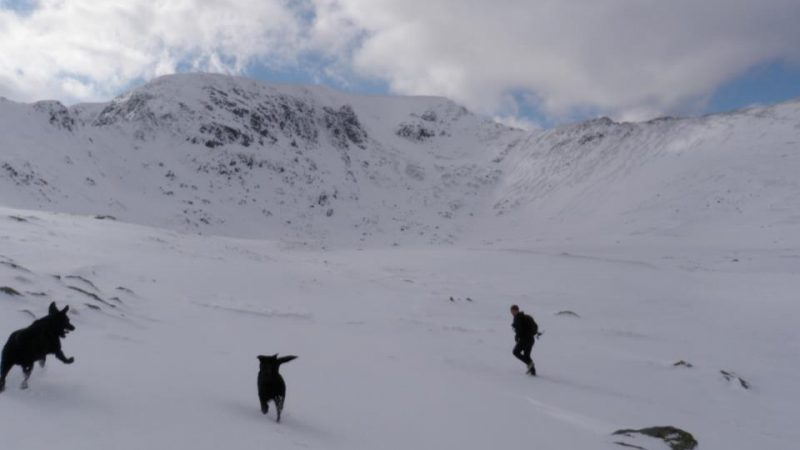 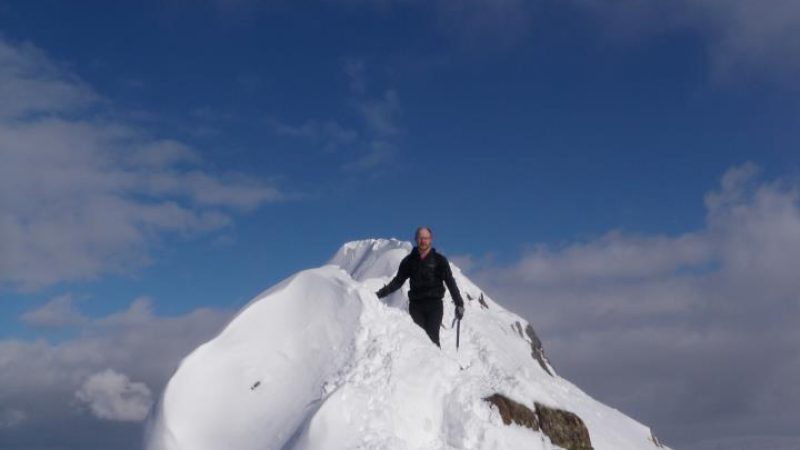 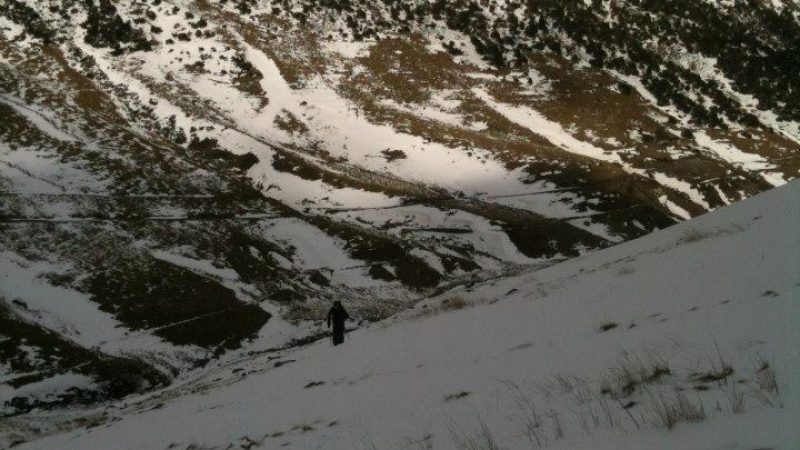 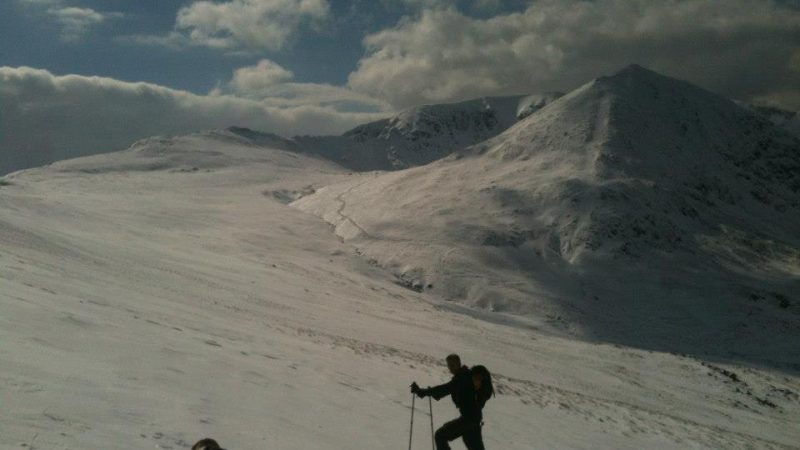 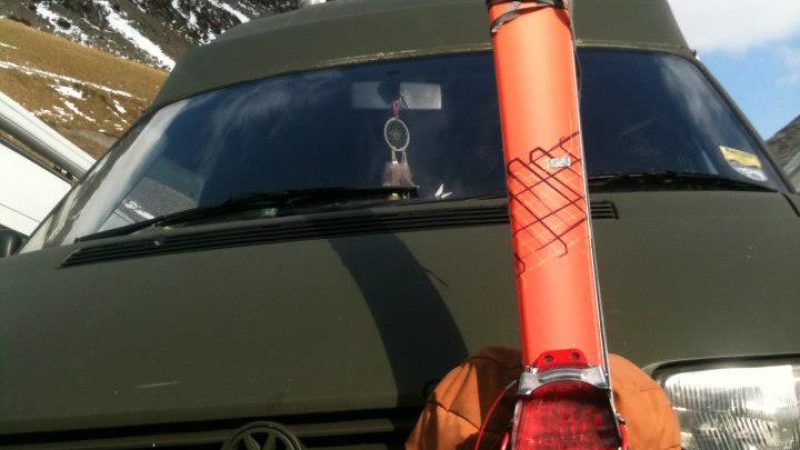 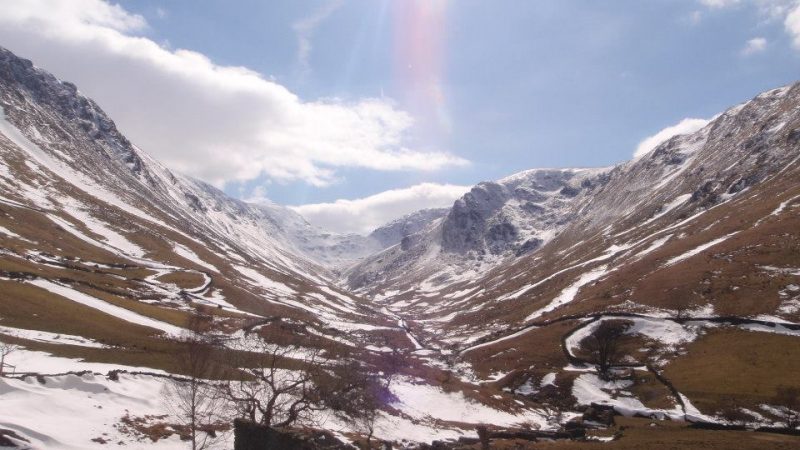 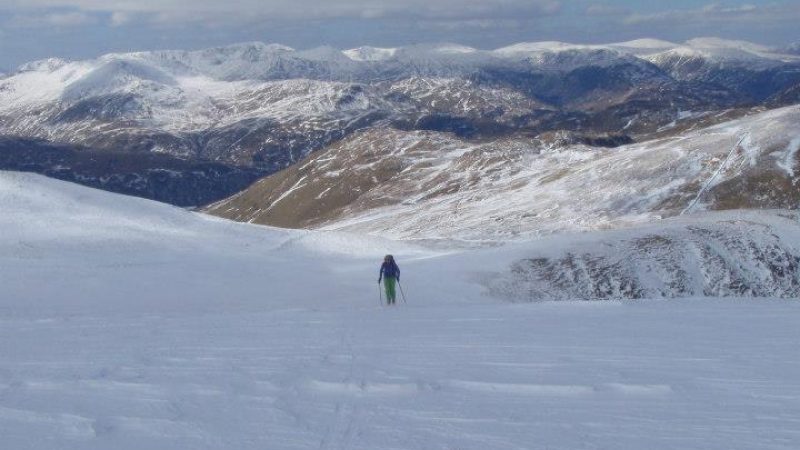 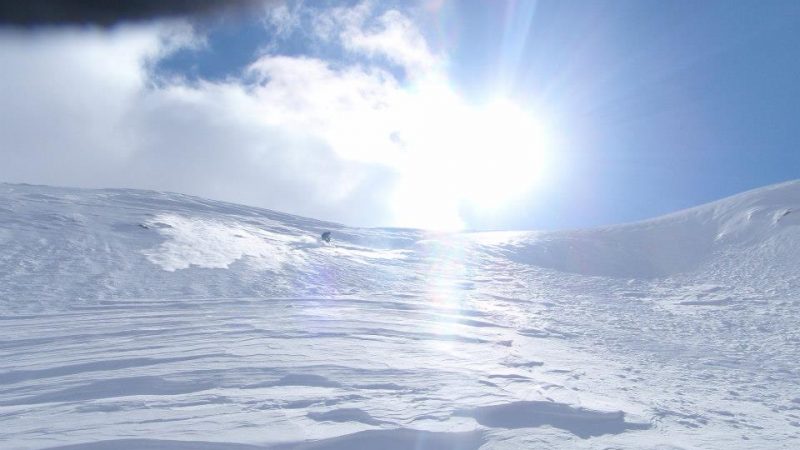 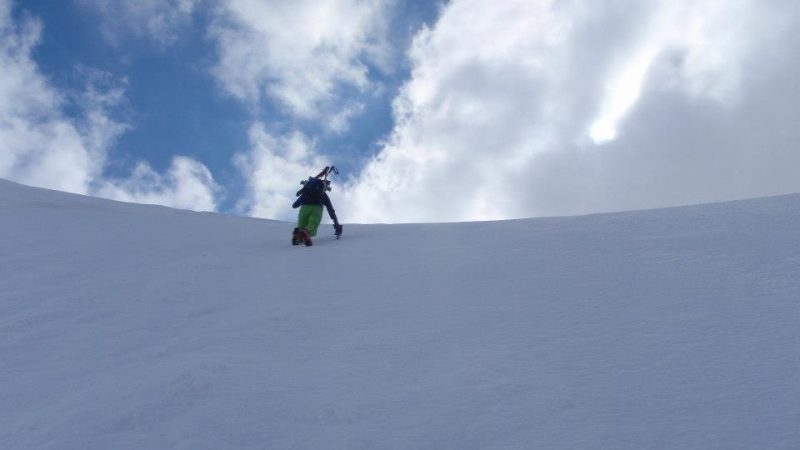 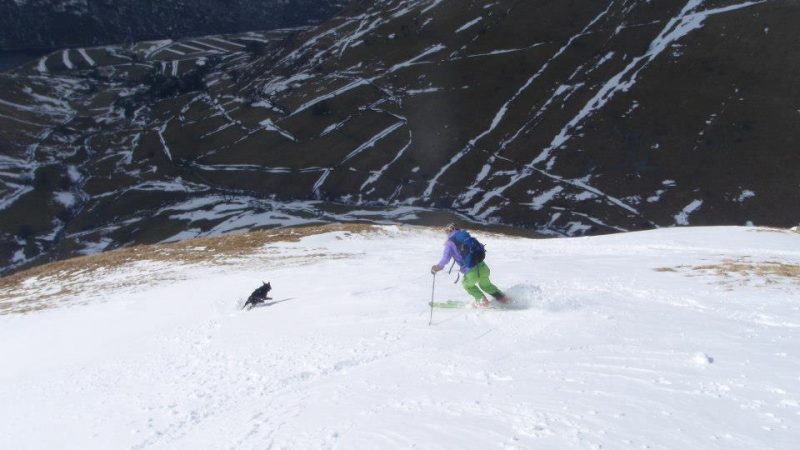 I learnt to ski in the Lakes, we had a rope tow up Kirkstone Pass, one of the first, if not the first. From the age of 6 I have played on skis and lots of it in the Lakes

I learnt to ski in the Lakes, we had a rope tow up Kirkstone Pass, one of the first, if not the first. From the age of 6 I have played on skis and lots of it in the Lakes. My dad taught me to drift ski, a great Lakeland tradition, as the snow is not always the best, it has to be said!! But as Andreas Fransson said at KMF last year, the Brits have a passion for skiing more than most European countries, maybe because our winter conditions are more fickle than the rest.

This year, like winter 2009/2010 has been a great season fro skiing. I first put skis on and traversed the Helvellyn Ridge from half way up Raise to a descent of Swirral Edge and Catstye Cam on November the 5th 2012, almost 6 months later I still have skis ready for the brilliant conditions we have been blessed with.

In the last 7 days I have skied all but 2 days. 1 of them I ran and today it just wasn't possible, despite my desire. We are off to Les Houches tomorrow and I guess I had to pack... its crazy, but I would rather ski in the Lakes when its good, then go abroad. Don't get me wrong, once I'm in Les Houches I'll love it, but when I know the skiing is good in the Lakes there is no place I would rather be.

I've been out with a couple of folk i've never skied with before, Jem Hubert and Jon Deagan and I've been out with two good skiing partners, Shelley Barlow & Steve Clee. We've skied lots of different slopes, lots of different areas and there is still so much I want to ski. I've seen some of the best lines ever and not had the time to tick them off. But there is always time, winter WILL come again and when it does, I will know where to go for the best downhill the Lake District can offer.

I'll run through my days in brevity, as there's too much to tell and I don't want to bore you to death..

We skied, on Shelleys knowledge, from the bottom of the Coppermines Valley to almost the summit of Wetherlam. I've not skied on this side of the Lakes, as its often too rock, but the snow and the wind has created some of the best slopes ont he NW facing aspects. Shelley took us to a line that descended 500+m and was a 6km round trip. 3km up, 3km back down. The line was roughly Red Gill, coming off Red Gill Head Moss.

Now I've moved over the pass I have to drive the kids over Kirkstone Pass a few times a week to drop them at school, it might seem like a hardship, but we get an amazing drive and I get to check out the snow and ice.

I've been looking at Caudale Head all winter, its been looking good. I recon it will hold snow for a while yet, but we got more than we bargained for on this occasion.

We set off at Kirkstone Pass, skis stright on, good snow and we headed up onto St Ravens Edge, from here you follow the wall up onto Caudale moor and then Stoney Cove Pike. The moment of truth was here and we descended towards Caudale Head, skirting right as I knew there was a big conice, I'd spotted it from the road. It was bigger then I had imagined, but I found a place that looked like it was just rounded and went to drop in..... and drop in I did!! I went from hard pack wind blown snow to completely soft 4ft deep powder, needless to say I disapeared and was lucky not to avalanche the top section! Whilst digging myself out I expected it to go, but I stayed where I was and when I got myself sorted I saw Jem, John and Shelley further towards Hartsop Dodd descending in great powder.

I joined the fun, took a steeper line, skied over previous avalanche debris and joined them in the bowl at the bottom. Perfect Lakeland skiing, my best yet! We where thinking of heading back up the ridge of Caudale Moor, when jon suggested we head over the drumlin in front to check out how far it went.... smiles and joy, the snow continued so we skied it and skied it... and skied it... all the way to the road!! Summit to road, in the Lakes.

I had a meeting with Andrew Burton from Inov8 on Friday, about the natural running courses i will be running in a few weekends time. We tied a meeting in with a run around the edges.

The usual route of Glenridding YHA, upto Red Tarn, we met Wesley Orvis out with his mate coming back down after climbing Gully Number II. Up onto Striding Edge and we met Al Hinkes on his descent off the exit from Striding Edge onto Helvellyn, he was out with friends. We had a good yarn. The exit was great, Kahtoola KTS Steels did the job and the top of Helvellyn was quite.

Summit made, we headed to Swirral Edge and dropped down the exit slopes with beautiful snow pack underfoot and ran the real edge all the way to the ascent onto Catstye Cam. The summit gained and we descended by the best method, Glissading of course!! Roughly 400m's of sliding on our bums, fast and furious.. but it left me with cold burns on my ankle... I had taken my tights off on the ascent to Red Tarn.

I picked a friend up the day before, Steve Clee, a local lad who likes to travel. He was just back from the beaches of Goa, India. 36 degrees C to minus 2 in a couple of days. After clearing a bleary eyed hangover with coffee we headed out to ski around Striding Edge, or at least that was my plan. Steves fitness and time saw us lagging slightly, so when we had summited Birkhouse Moor, there was only one thing to do.... ski the whole way back down!

What a descent it was. Yehaw, woo HOOOOO! Beatiful snow, great turns, telemarking rules and we hit the pathy to Red Tarn with smiles from ear to ear.

A quick stop at the Travellers Rest in Glenridding added to the endorphin buzz and it was back home to enjoy some family time.

We picked Nicola's kids up at mid day, had some lunch at the Queens Head, drove over the pass and straight to Glenridding YHA. I packed the kids ski boot and skis, put my own skis on my pack and we headed upto Birkhouse Moor. Nicola and Steve came a few hundred meters, but Winter was crying, nics foot is still not right and Steve was feeling the pace, he had had Delhi Belly less than 3 days before... poor guy!

Millie is 7, Isaac is 10½. both of them walked halfway up Birkhouse Moor, good for Isaac, excellent for Millie. Millie got her first Lakeland Ski descent on perfect snow, in perfect sunshine... what more could you ask for.. and I was clocking the ski miles.

Monday 1st April 2013 - Hartsop Carpark to Rampsgill Head with a few descents on the way back....

Rampsgill Head is a reliable snow holder, it faces the right direction, especially when the winds blow the snow in from the East.

Shelley and Charlie, the Lakes hardcore ski crew headed off up towards Hayes Water around midday. Shelley was lagging, too many ascents, too many descents and she was feeling the pace. Charlie was fresher, if not a little hungover again!! Scratch and Pepa the ultimate ski dogs where pushing hard. We had skis on just on the side of Gray Crag and kept them onto the summit of Rampsgill Head. The snow was perfect, the sun was out and this was Easter Monday, 2013!! Can you Adam and eve it??? I can/can't.

We'd already check the line into Rampsgill Head so we skied from the summit, no break, or at least not until the steep entrance was out of the way. Shelley how ever stopped in the steepest part of the slope on some pretty icey stuff.. a few worries, and she was turning like a pro. This girls seen some snow in her time, little faizes her. The dogs took an easier line and we headed over a hummock to check the rest of the line and we weren't pissed off, thats for sure.

You might see a common theme here, but I had the BEST ever ski descent in the Lakes I have had to this date... the snow was mega, I was feeling just right, my skis were super skis and the speed I went was mind boggling for skiing in the Lakes, with rocks dotted around... needless to say, my adrenaline went sky high!

Skins back on, and up we went, back out the way we had skied in until we couldn't skin anymore. Skis off on dodgey slope, wished I had my ice axe this time, it was the first day I had left it behind. Heart in mouth, heavy breath and we were out, on safe ground again. Skins off, skies on and down the Knott we went. All the way to Hayes Water... mega descent on spring snow in perfect sunshine. Scratch ran along side me as I skied and watched his gracefullness.. I wonder if he was thinking the same thing?

Skis off, onto packs and off we headed up onto the shoulder of Gray Crag for our final descent of the day. The Northerly shoulder was our first port of call, then it was off round the front to teh westerly aspect and more spring granulated snow. It was a bit grabby, but it was mint all the less, brilliant turns on virgin snow, in the Lakes in alpine conditions. Can you really ask for more??

6 great days out in the mountain, great company, great snow, perfect weather... my fitness must be improving, my mental state certainly is.... Do I want to go to the Chamonix valley? Of course i do, I just wich the conditions for skiing weren't so good here.... I can't get over the fact of how many good descent lines there are and yet I can't get there/haven't the time to do them... lets hopw for more perfect winters to come ;-) 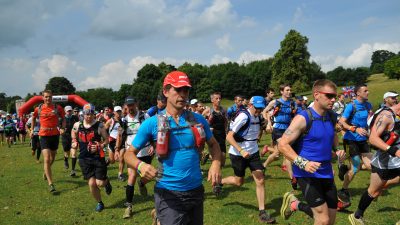 Lakes 100 Checkpoint and the Lakeland 50

Running a checkpoint and trying to compete the following day is a tall order, I've tried for the last 2 years, this year I got my chance at the 50 and blew it.... 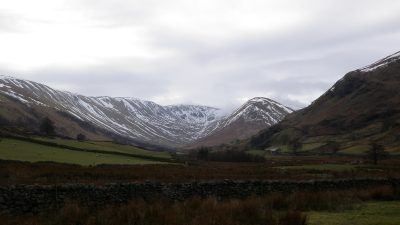 Martindale is a great valley, cut off from the rest of the Lakes by the col between Hallin Fell and Steel Knotts, its like a hidden valley. Granted everyone knows about it and its most likely a busy little place in summer, but in mid February, you can go there and forget about the rest of the world for a while and most likely see nobody.